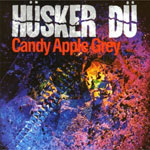 R. had an extra ticket for Bob Mould last week, so I went and saw him play, at the venue that used to be the Irving Plaza and now has some confusing hyphenated name. I was glad I went, as the show was much better than I expected: Bob looks good, he can still play fast and loud, and his backing band seemed young and excited. His voice is shot, but that’s probably to be expected. But he played a fair amount of his old work, including “Hardly Getting Over It” off this CD, which I certainly hadn’t been expecting. The last time I’d seen him had been a decade ago, in some seated venue in Boston filled with a balding crowd of aging punks; the whole thing was dispiriting, not least when a member of the crowd exhorted us to dance in the aisles to minor effect. The punks have aged further; but this crowd looked better, doubtless because in the time since I saw him last Bob Mould has become a minor gay icon.

I have acquired, as it turns out, a fair number of Bob Mould CDs in his various incarnations, starting with the Sugar CDs which I picked up back in high school and going up to one of the not very good late-90s solo Bob records, sweeping back in time to include most of the Hüsker Dü records. I’m not sure why: there was almost always something good on each of these records, but I’m not sure that I ever really unconditionally loved any of them, save for Sugar’s Beaster, with which I was briefly and unhealthily obsessed. They filled a certain need though: the teen need for angry depressive music; there was enough variation in the quantities to keep things interesting. Listening to Bob again, it was striking how concrete a lyricist he is: he deals in concepts rather than specifics, more pronouns than not, only the most basic of metaphors. It’s easy for the listener to insert himself into his abstractions. More discerning taxonimists of punk called Hüsker Dü “emo”; that word came to mean something embarrassing, but one could draw a connection.

I bought this copy of Candy Apple Grey in Rome in the summer of 1999; I think it was at the used record store on via dei Mille. Google Street View suggests the name was Millerecords, and that it’s still in business, though that’s hard to believe. For part of that summer, I was living in a third-floor apartment a few doors down the street. I have a distinct memory of sitting at the kitchen table of that apartment, listening to this CD on a rented laptop while working on the LG Rome book, on headphones, I expect. I was listening to a lot of punk and post-punk that summer: Joy Division & The Fall. I was being unpleasant.

This is an intentionally depressing record: you can’t get around that. Listening to it, you get the sense that everyone in the band hated each other, which may well have been true, though I don’t know Hüsker Dü history well enough to know whether that’s true or not. This isn’t a record one can pin on any Roman narrative (though that summer some well-meaning graffitist was tagging Trastevere with the Hüsker Dü logo); this is unavoidably a record about young Midwesterners angry at how terrible the world is. It’s a hard record to listen to; I remember playing it over and over that summer, but I don’t know if I’ve played it since. It’s very easy to associate a record with a state of mind; there’s the temptation to blame it on the record, to claim susceptibility. I don’t know if that’s ever actually the case. But it’s an imposing record, from the front cover on in: the stenciled logo; the inscrutable art that suggests something industrial, an oil slick, maybe; the title, which refuses to make sense.

Most of all the sound of it, the sound of three people who aren’t having a nice time. The slow songs are the songs I remember here, songs I played again and again – Mould’s “Hardly Getting Over It,” which seems to be about a child’s apprehension of death, and Grant Hart’s “No Promise Have I Made,” a ballad in form, an angry break-up song in content. (The faster songs aren’t as memorable: the lyrics are equally despairing, but the production is too polished and it feels a bit too much like straight-ahead rock of the ’90s.) There’s a tension between Mould’s lyrics, exhaustive self-scrutiny that occasionally detours into the bathetic – “Grandma, she got sick, she is going to die / And Grandpa had a seizure, moved into a hotel cell and died away / My parents, they just wonder when they both are going to die / And what do I do when they die? ” – and Hart’s comical anger-for-anger’s sake. There are a couple airplane disasters for good measure. It’s a queasy record. I don’t know if it’s a good record.

But it is a powerful record: in my memory it’s an analogue for being unhappy with the world. Why was I unhappy with the world then? That summer I theatrically told people I was having an art crisis, that I wasn’t sure that there was any meaning in any sort of creation; where exactly that excuse came from, I don’t remember, but I did convince myself that was the reason for my unhappiness. Rome means anything you want it to. I was trying, with some success, to drag personal meaning out of William Gaddis’s The Recognitions; this was unfair to the book, I realize now, but it did seem vaguely possible that answers could be hiding somewhere in its apparent opaqueness. When all you have is a hammer, everything seems a nail; from inside this, it’s hard to understand this. A decade later, it’s nice to hear this record, but I don’t believe in it anymore: the sacred power’s drifted away, and it’s just a battered CD. It had its place: that’s something.