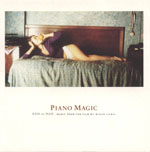 This CD has one of those stickers that says MADE IN ENGLAND on the back, which means that it would have been more expensive. I wonder if that’s still the case? I remember buying it at Other Music on West 4th; probably I’d left work from lunch. Is that possible? The office in fall of 2001 was at 8th & 15th; would I have walked so far? Maybe not. Is it possible that I bought this before getting a job? Maybe – I came back from Rome having listened to Low Birth Weight over and over again & wanted more Piano Magic, immediately. Seasonally Affective, a compilation of their EPs, was released just as I moved to New York; I remember listening to it while in the New York Public Library, trying to find myself a job and an apartment. This would have come out soon after. I do have a distinct memory of buying it at Other Music and hastily unwrapping it to put it in the Discman; that was what you did then, the fastest way of consummating desire.

This is a beautiful CD – it was the first record Piano Magic did for 4AD and they took pains to make it look like a 4AD record. The pamphlet is a thick square of cardboard, which is a neat trick, as it feels unlike any other CD; moody stills from the Bigas Luna film are on the front and back. (I did get around to seeing this film several years later & can recall almost nothing from it – it wasn’t bad, it simply wasn’t that memorable, save for this soundtrack. The CD is six untitled tracks; parts of it are from A Trick of the Sea, which I’d also listened to over and over again. Somehow this reuse didn’t offend me – that record sounds like a soundtrack already: plaintive strings, wordless vocals, what sound like clocks, bits of found sounds, keyboards. Sounds of waves, of course. The last track, almost longer than the others combined, is propelled by a motorik beat: there’s more obvious looping and use of electronics if you pay attention, but it still feels organic.

The Piano Magic aesthetic – miniaturism, the analogue, reimagined Victorianism – has became oddly dominant in the past decade. There’s an exhibition of the sets of the Brothers Quay up at Parsons right now, and it’s strange how familiar their creepy dolls, hand-cut paper, and bits of taxidermy have become. It’s the same impulse that led others to old-timey music at about the same time, probably: as the present becomes increasingly electronic, the past becomes more appealing. The Piano Magic records still sound distinctive – I can’t think of anything that sounds quite like this now – but maybe less so than they did; there’s been a stampede to reclaim the past, and I’m sure I’d find that somebody’s mining this territory if I bothered to look.

This isn’t quite as nice as A Trick of the Sea, which has spoken-word vocals which give it just enough purchase on the ear. This is evocative – everyone likes the sound of the sea, especially if you’re from the Midwest – but it loses hold very easily. The Piano Magic records past this one tend to get trapped in their own despair, only occasionally transcending it. I like this, listening to it now, but the sadness in it threatens to become overwhelming. Rolf accused me, at about the time I would have been listening to this, of only listening to sad music. That was my problem, he said, and also I was not lucky enough; luckiness, he proposed, was a skill that could be cultivated. It’s hard to argue with that.

It’s hard to remember what purpose background music served. I would have played this while alone, reading, probably. Painting? I was painting then, sometimes. Would I have played this at work? This is evening music, it wouldn’t have seemed right. I don’t think I would have, I had that much sense.