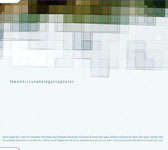 I remember a couple of American Analog Set records in college – they’d been pegged as the un-intellectual Stereolab from Texas – but for some reason I was taken with the album they released just before this EP, which was less droney and more warm indie. It’s possible they were the first band I saw in New York? maybe in September 2001? but that doesn’t seem quite right, I don’t think anything was happening that month. They headlined a show at the Bowery Ballroom where Interpol opened & you could tell by their fans that all was not going to be well in the coming decade. The date on this CD says 2001, but I feel like I probably bought it early in 2002; in the fall of 2001 I was too poor because I’d just moved to the city.

Certainly I associate this with a cold winter in Brooklyn; I don’t think that winter was much colder than most winters in New York, but the landlord hadn’t bothered to insulate the room that I was living in (which protruded into the back yard of the apartment), reasoning that it would be cheaper to give me a space heater. But that was the winter of twee/electronic crossover; there was the Notwist record & the first Ulrich Schnauss record (a CDR of the two of them back to back) and all the rest of the early Morr Music/City Centre Offices people – Isan, Lali Puna, Arovane, Static, Solvent. They sounded nice on a Discman as one trudged through snow to a job that was unbelievably terrible but seemingly inescapable: ineluctability was in the air. I was reading Thomas Bernhard and Hermann Broch.

(Discmen were everywhere in New York at that point; on the subway, it seemed like everyone had them. I remember being surprised; in Rome, it would have been very strange to wear headphones on the bus or the subway. Discmen had become extremely cheap; soon they’d be replaced by iPods, but at that point everyone carried around little books of CDs with them. I would have had a (restrained, tan) Invicta backpack at that point – I wonder what happened to it?)

This record, though: there are six tracks, two remixes each by the American Analog Set themselves (one presumes), Her Space Holiday, and Styrofoam. I would have bought this for the Styrofoam remixes, which I probably played over and over, just as I’d done with his A Short Album about Murder. Listened to now, the AmAnSet & HSH remixes sounds utterly unfamiliar. The first two sound unfinished. Her Space Holiday I never liked for some reason; maybe I was disdainful of them for not being German, not feeling like they came out of a tradition. But nothing grabs me about these tracks here; the originals are recognizable under layers of noise (the first) and faux hip-hop shifting to faux drum & bass (the second), but I don’t know that they’re especially nice as songs – I think I liked the sound of the originals rather than the songs themselves, maybe evidence of a change in how I was listening to music.

Listened to now, the Styrofoam remixes seem emo beyond all hope of redemption. On the first, looped melodramatic keyboards are layered with plastic crunchy drums & strategically placed noise while the original vocal floats serenely through; warm bass builds. At the time this was some sort of dream come true: German electronics meeting American indie pop. Dntel would do roughly the same thing a year later with a better vocalist and less Germans & turn into the Postal Service & then everything would be over, but this sounded fantastic over headphones walking through snow. Listened to over speakers now, it sounds a bit too much like they’re trying for the cinematic. The second is named “We’re Computerizing and We Just Don’t Need You Anymore (Styrofoam’s freezer burn mix)” which seems about right: glitched vocals, warm synthesizers. It’s a pop take on IDM, I guess, which seemed like a valid approach at the time: the Warp acts had run into a wall at about that point, and this seemed more palatable than Mille Plateaux-style clicks and cuts. Probably the clicks and cuts would sound friendlier now; probably some of that holds up better than this.

Things were generally less bleak after the winter of 2001/2. I lost touch with what the American Analog Set did some time after this, though I feel like I saw them do a show at the Knitting Factory a year or so later; by that time everybody else was doing the exact same thing & they weren’t so distinguished. Styrofoam went more indie (like the rest of the Morr Music stable) and it was roundly terrible and I stopped listening to him. Oh well.