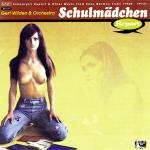 I would have first heard this in the summer of 1997, I think, when I was, for reasons still unclear to me, the associate editor of Let’s Go Ireland 1998; probably my hearing this was the fault of Alex Speier – who might have become the Harry Crosby of the late-90s Let’s Go set after writing the masterpiece that is the Harvard Student Agencies Bartending Course (available at Google Books in mutilated fashion), though thankfully he seems to have turned into a successful sportswriter since then. As the cover suggests, this is a compilation of music from 1970s German porn films about schulmädchen; from the dubiously titled Crippled Dick Hot Wax, it fit in nicely with the wave of late-90s indie cosmopolitan exoticism (Pizzicato Five, Serge Gainsbourg, Ennio Morricone). The liner notes on this are minimal; one has no idea on how Mr. Wilden’s music fit into the history of German film music, if at all.

Though it seemed perfectly normal at the time, the Let’s Go office was an odd place to work, not least in that at that point in time everyone had their own computer with CD-player and speakers; as it was staffed by college students, everyone was constantly playing their music loudly, generally in counterpoint to everyone else’s. Schulmädchen Report soundtracked the Britain & Ireland pod for a good part of that summer, along with a Willie Nelson box set, the self-titled Blur album, a cassette tape of Irish drinking songs, and the new Oasis album, which Eric attempted to convince everyone was almost as good as their last one. There was very little variation in this diet  – no one’s taste matched at all, and those were the compromises that were worked out. Schulmädchen Report generally worked the best – the songs, cheerful to the last, vary in tone (the patriotic one, the rocking one, the Christmas one), and the disengaged worker could spend a long time speculating on what acrobatics might have been going on in the films these songs soundtracked. Nobody ever though to track the films down, but someone knew someone who had seen one once. Probably we played this once a day for most of the summer.

When Sam and Eric and I worked at Cognoscenti, did we listen to this? I don’t remember that, though it’s certainly possible. But the mood would have changed by then, I think; it wouldn’t have been summer, and this is a summer record. Records wear out, probably this had worn out.

The disc I have isn’t the original, which I seem to remember bequeathing to someone – a roommate? the Co-op? – I bought a second copy, presumably identical to the first, a few years later. It’s nice to hear. This would be a nice record to have in a car, maybe. No, actually: it’s too obviously a soundtrack & you’d feel foolish.