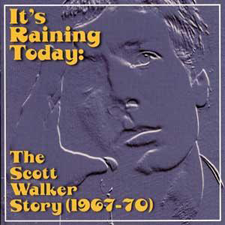 For a long time, it wasn’t clear to me that my consumption of music wasn’t always so much about music but about context. One way this manifested itself was rigor: trying to convince myself that I liked something more than I did because there was some reason that I should like it, because it fit into some received idea about authenticity or because I’d mentally aligned myself with the artist or label. Sometimes this paid off, of course; mostly this was a waste of time. A related version of this response was to respond not so much to the music as to the narrative around it. This happens all the time, of course; it’s the goal of marketing, and one quickly becomes desensitized to it in the purest form. But occasionally one finds oneself caught up in the narrative around an artist: the allure of Pynchon was that he was never photographed. That doesn’t explain his books, which finally have to stand on their own merits. When one’s young, though, one imagines that there are hidden truths everywhere that everyone else is too stupid to notice.

It feels odd to talk about Scott Walker now: it’s hard to argue that he’s particularly obscure. His records are in print; there have been a couple of books; there was a terrible documentary and a largely unnecessary covers record. He’s readily available on CD, vinyl, and MP3, and you can go on Spotify and hear hours of obscure early tracks. One now has to argue that his bad records were actually the good records to get attention. But there’s still a shape to his narrative that’s appealing: a guy releases a series of perfect pop records, loses his way terribly, then returns, strange and inscrutable, further out than anyone. It’s an attractive story: genius going unnoticed, a fall, redemption. There’s the pleasant puzzle of trying to reconcile the old records with the new ones. It’s something that worked on me: I think I have two copies of most of the major records, generally because I was somewhere where the media wasn’t and the music seemed necessary. I don’t know where most of them are at this point; I don’t have most of them in my iTunes as MP3s, though I’m sure I could find them if they seemed necessary.

This CD, which Razor & Tie put out in 1996, is a compilation of tracks from the first five Scott Walker albums, plus I think a couple of singles. There was probably a window where this CD was the easiest way to find Scott Walker’s early work in the United States. I’m fairly certain that this was not actually the case when I bought this CD, probably in 1999; but it’s possible that this was the first or second album by him that I bought, the other being Tilt. Soon after I bought this, I would have gone off and bought Scotts 1–4 and ‘Til the Band Comes In. This CD was mostly extraneous even then; the back of the booklet helpfully shows the covers of the first four Scott albums, which are better than this. The selection here is more interesting than it might have been: it mostly avoids the Jacques Brel covers (though “Jackie” and “Next” are here), and there are a handful of tracks from the first half of ‘Til the Band Comes In. There are liner notes by Marshall Crenshaw; I don’t remember who he is, but I associate him with tasteful NPR music; the content’s about what you’d expect.

The Photoshop-filtered cover and questionable font choices make this an embarrassing CD to display. There’s no edge here, which would have mattered to me at the time: it’s in the lyrics, though it’s not in the music that accompanies them. Tilt unquestionably had edge, as did Climate of Hunter; those were the Scott Walker records I liked best, and probably the ones I played the most. There’s something attractive about the ruined squalor of ‘Til the Band Comes In; and the first four albums I could (and still can, mostly) appreciate for the sustained mood. Here, however, the listener is being asked to appreciate these tracks on a song-by-song basis; and that doesn’t work particularly well for me. Probably I would have spent a lot of time playing “The Seventh Seal” – the shear novelty value of a pop song from the 1960s about Ingmar Bergman. But in the 1990s, I was more interested in albums than in songs. At that point in time, you could make a mix-CD, but it would have taken most of an evening; too much work.

It’s odd, actually, how little the selection on this compilation corresponds with the parts of the early Scott Walker that I like. I might not be alone: there’s a slightly later compilation, Boy Child: 67–70, which covers the same period in twenty tracks; only seven coincide with the seventeen on It’s Raining Today. Were I to do something similar, I’d keep at most six of the seventeen tracks on It’s Raining Today. Generally I like 3 and 4 better than 1 and 2. I think it’s that the more atmospheric and stripped-down songs (“Boy Child”, “30 Century Man”) do more for me than the more grandiose pop; “Farmer in the City” is probably the Walker track I’ve listened to the most times, and Climate of Hunter the album. I haven’t talked about his voice, maybe the absent center in the way I think about Scott Walker. It’s much more the sound of it than what he’s actually saying; it’s a voice that sounds good singing almost anything. The lyrics might have been an entry-point: there was some edge there. I listen to lyrics less than I once did – when I bought this I would have been listening almost exclusively to English-language music. There are word choices here that slightly rankle, but I don’t dislike them. But pure sound is what matters.

This CD isn’t presenting my Scott Walker, though it seemed to be pointing at better things. The way I read the narrative of Scott Walker then was as an artist who’d learned some great secret; maybe by listening to the old songs again and again, I could figure it out. I don’t think that’s true any more, but I still like some of the songs.