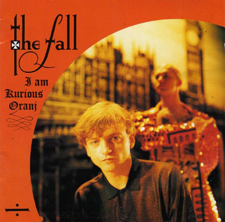 I don’t actually remember when I started buying records by The Fall. This one I think I would have bought in 1999, because I remember listening to it that summer in Rome; I suspect it’s fairly early in the chronicle of Fall albums that I would have bought. First was probably The Wonderful and Frightening World of The Fall, which was easily available but didn’t do very much for me aside from “No Bulbs” and “Disney’s Dream Debased”; then there would have been Hex Enduction Hour, which was basically too much for me, except for “The Classical”. Obviously what I should have done is to admit that I liked The Fall’s poppy singles and bought the singles collection, but I didn’t for some reason; whether that was because it was only available as an import and thus more expensive or because of the belief that albums were what mattered, I don’t know. Nonetheless, I persisted in buying records by The Fall, and finally got to this one, which I did end up liking, even though popular opinion has it as terrible.

Looking at the CD more carefully, it seems to be a British edition; it’s possible I bought it in Rome, at the little record shop on via dei Mille which can’t possibly still exist. That was the summer that in retrospect I seem to have been trying to be as awful as possible to the people around me as I could possibly be; it’s something of a miracle that most of those people are still friends. I’d arrived with my well-worn copy of The Recognitions, the Northwestern-Newberry edition of Melville’s Clarel and a CD-ROM of the Joy Division box set, all of which obviously spelled out trouble. I convinced myself that I was having a sustained aesthetic crisis; I didn’t finish Clarel, predictably enough; I bought a preposterous number of CDs and listened to them on the tinny speakers of the ungainly PC laptops that we’d been given to edit our travel guide on. This was probably one of them: the booklet shows the circular imprint of a CD from being transported in a binder. How it subsequently acquired a jewel case, I don’t know.

This is ostensibly the score to a Michael Clark ballet about William of Orange. I don’t know anything about the ballet past the sleeve notes, which don’t really say very much, though something of a plot might be discerned if one paid close attention to the lyrics. It’s from the Brix Smith years of The Fall, which I generally like, though maybe I like the immediately post-Brix years most of all. Critical consensus seemed to be that this period, and particularly this album, was a disaster, though who knows what that even means. But I liked this record then, and I generally like it now, though it’s been a very long time since I’ve listened to it. For a while, “Cab It Up!” would play in my head whenever taking a taxi uptown. Looking at the tracklisting, I can remember how most of the songs go, which is something. Two versions of “Hip Priest” from Hex Enduction Hour bookend the album; maybe that was the big single for this album. It’s what between them – generally less stomping – that I really like. “Overture from ‘I Am Curious, Orange’,” which is credited to Brix and is mostly instrumental, is what I remember to listening most. It doesn’t sound very much like The Fall: it’s too clean, and what lyrics there are are mostly Brix reciting song titles or refrains from older songs by The Fall; it feels like it’s about the consumption of rock music, maybe in a teenage way, rather than rock music itself, and I like that. Then “Dog Is Life/Jerusalem,” which starts with Mark E. Smith angrily ranting about dogs, which turns into a blistering version of William Blake, which then gets lost when explanations of how “it was the fault of the government / it was the government’s fault” are added in between refrains of “Jerusalem”. There’s a lot of slightly modified repetition on this album and I like that. The beat is krautrocky; the song could go on for an hour and I’d be happy.

“Kurious Oranj” is a list song about the supposed accomplishments of William of Orange’s men: “they built the world as you know it / all the systems you traverse”. I remember once seizing upon a couplet in this track as being especially meaningful, but then I realized I was mishearing it; I don’t remember what it was. William or Orange is presented admirably ambiguously: responsible for basically everything both good and bad in British history; he stands unmovable and Smith grapples with him. “C.D. Win Fall 2088 AD” gives “Hip Priest” a house beat and presents the future; “Van Plague?” is maybe the center of the album, trying to connect AIDS (never mentioned by name) with the history of British imperialism and transatlantic trade; heard now, it’s still affecting, reminding me now of Delany’s Flight from Nevèrÿon. And then “Bad News Girl” (the halting refrain “heart – stop – girl” I always liked) and “Cab It Up!” which I’ve already mentioned. Maybe this album is a little too long; but repeated refrains keep hiccuping out of the background, and it all feels of a piece. There’s a clear focus to this album – British history – but nailing down exactly what Mark E. Smith’s feelings toward it might be is tricky.

Somehow I didn’t hear “Leave the Capitol” with it’s refrain of “exit this Roman shell” until years after I’d left Rome; mentally, it fits with this. I don’t know that this is an album that I can tie down to a particular place and time, though; it stayed in rotation for a while. When I moved to New York I broke my own rule and bought a live Fall album, an import even, a beautiful orange disc called “I Am Pure as Oranj”; I think I listened to that once. Probably it’s around somewhere.