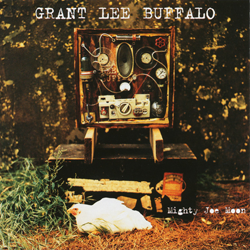 This is one of the oldest CDs that I own; I would have bought it when I was in high school, almost certainly used, because that was how I acquired music from bands I wasn’t sure about then; probably from a newer store on East State Street in Rockford that only sold used CDs – that a store like that could be a business! – probably already with too many copies of Last Splash, soon to be getting a lot of copies of Monster.

Chronologically, I would have bought this in high school, but I mostly remember spending a lot of time listening to this (and the previous GLB album, subsequently acquired) during my first year or so in college. Certain albums you knew well enough to know every word; this is one, though relistening it turns out that I’ve forgotten most of them. Overuse, and to the service of an end that I find myself questioning now; but that requires exploring how music functioned in high school at the time.

I attended a small public high school in the rural Midwest which was then fighting off becoming a suburb of a mid-sized formerly industrial city with a strangely lasting segregation problem. The high school I attended was almost entirely white. We were not racist: that was a problem that they had down south. How could we be racist if there weren’t any (barely) minorities to be racist against? Why there were so many black people twenty miles away and none here was never really discussed; it was only after I left that I grasped how strange the situation was.

And this sort of attitude filtered down into music. Three paths were available, based in no small part on the radio: pop, country, classic rock. (A fourth was conspicuous by how innocuous it was: the hardcore fundamentalists took themselves out of the mix by listening to the Christian stations, which everyone acknowledged, at that point in time, as lame.) Country was for hicks; at the time I didn’t recognize the economic underpinning of that grouping, though it was certainly there; it was “trashy”. Hip hop and R&B, during the time I was in high school, weren’t something that white males listened to: there was the idea that you were trying to be something you obviously weren’t. Anything electronic – pop included – was seen as touched by the possibility of queerness; the disco bonfire at Comiskey Field wasn’t that far off, either in space or time. And so we had classic rock, which was white, male, and unquestionably straight. It was an aggressively dumb genre; there’s not a lot of poetry in that canon, or at least the part of that canon that we heard. Were I from a background somewhat more sophisticated, it might have been an easy jump to Bob Dylan or the Beatles; but culturally, I didn’t really have any context for how to appreciate them.

And so I would find something like this CD, which wasn’t an enormous jump from what I had heard, but which did present other things that were interesting but that I didn’t know how to get to: the Harry Smith folk tradition, the paisley underground bands, toned-down glam. Hard rock guitars on the opening track protect against the dangerously fey possibilities of folk. The mixture waters it down, maybe too much. A more informed critic would have seen this as clearly derivative; I didn’t see that, of course.

It was primarily the sense of Americana that comes through this record that I was reacting to: the idea that there was something in the society around me that might be interesting, that there was an old, weird America under the surface. The idea that there might be something valuable underneath the empty culture I grew up in was a little astonishing to me (and still is); it didn’t matter much that it was ersatz (this was a California band, after all). And part of my attraction to this, I think, had to do with the realization – and this would have come later, after I’d arrived at college – that my background was comparatively as boring as could be imagined; there’s not a lot that can be said in your favor if you’re white, male, and from the Midwest. So the idea that something could be reclaimed from that was attractive. That’s not particularly fair to this album, but that’s where I was coming from when I was listening to it, and that’s what I heard here.

Most of the critics at the time that I could find seemed to think this particular record was a slightly warmed-over rehash of the band’s previous one, which might be true, though I never liked that record quite as much, and consequently worried about my critical faculties. The record they released after this one wasn’t as good either, as much as I wanted it to be, and I can barely remember the band’s fourth album, though I would have had that one too. The other albums seem to have disappeared from my possession; when and how, I do not know. All but the third – rectified somewhat by the inclusion of a greatest hits and b-sides collection that I never had – are conveniently on Spotify. Grant Lee Phillips, the lead singer of the band, seems to have had a reasonably successful solo career, with a whiff of tasteful adult-oriented alternative. The sound makes more sense now than it did in the Clinton era, though this band always seemed aimed at an audience slightly more mature than myself. Even at the time, I think, I recognized this as something of a problem, but I never quite resolved it.

Marcel Duchamp had a concept of aura that was different from the better known version promulgated by Walter Benjamin: Duchamp claimed that works of art lost their power after a certain amount of time. It’s hard, of course, to know how seriously Duchamp meant this, but it’s a useful idea for thinking about what’s happened between this record and me. Maybe it’s what happens to all albums for me, given enough time: the power eventually loses hold.